Individuals who both pay and file their tax returns through the Revenue On-line Service (ROS) have until Tuesday 14th November 2017 to pay a pension contribution and elect to backdate the income tax relief against the 2016 tax year. Those who do not qualify for the ROS extension must do this by 31st October 2017. If you do not take this opportunity, you will not get another chance to reduce your 2016 income tax liability.

PENSION TAX DEADLINE FOR THE SELF-EMPLOYED

A self-employed person who wants to pay a personal pension or PRSA contribution and backdate the income tax relief against their 2016 earnings needs to do the following:

The return filing date is 14th November 2017 for those who pay and file their returns using ROS. If there is any doubt about qualifying for the ROS extension we would recommend you pay your pension contributions and file your tax return by 31st October to ensure you meet the deadline.

In order to claim income tax relief on contributions to a personal pension or PRSA the individual must be “chargeable to tax in respect of relevant earnings”. Relevant earnings refer to income of individuals who are:

EMPLOYEES AVAILING OF THE TAX DEADLINE

Once an employee leaves employment where they were a member of a company pension scheme, they cannot make any further pension contributions in respect of the income from that employment. Note: a termination payment made on leaving employment (under Section 123 TCA 1997) is not considered remuneration for pension purposes. This would include termination payments on redundancy, payment in lieu of notice and other ex-gratia payments. However, part or all of such a termination payment may qualify for tax relief under other available exemptions. 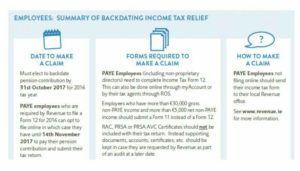 Revenue will not permit tax relief to be backdated against 2016 if you have not elected to claim the tax relief in that tax year as part of your tax return, or if a tax return has not been filed on time. This applies even if the pension contribution was paid by 31st October 2017.

Revenue has made an exception for PAYE employees who are not normally self-assessed where they:

If the above conditions are met then income tax relief against 2016 can be claimed.

If a person is not eligible for tax relief for any reason, this is not grounds for a refund of contributions. If tax relief cannot be claimed currently, then the person may be able to carry the relief forward and claim relief against relevant earnings in the future.

Tax relief on pension contributions are subject to two limits:

Where someone has two sources of earnings, one from an office of employment where they are a member of a contributory occupational pension scheme (pensionable employment) and the other either non-pensionable or from self-employment, the pensionable earnings uses up the earnings limit first.

Based on John’s age the maximum contribution he can make to the occupational pension scheme and claim tax relief is 25% of his earnings, capped at €115,000. So John’s maximum pension contribution is 25% x €115,000 = €28,750. As he is already contributing €7,500 he has scope to pay AVCs of up to €21,250. John’s pensionable income uses up the earnings limit first and as that income is greater than the earnings limit he cannot claim tax relief against any personal pension or PRSA contributions made in respect of his self-employed earnings. This applies even if he does not maximise his AVCs to the company pension scheme.