Opportunity before Pay & File ROS deadline of the 12th of November (or 31st of October for others), to backdate personal pension contributions to 2014 and obtain tax relief at 41% (for higher rate taxpayers within the usual limits for 2014) instead of 40% in 2015.

Confirmation that the pension levy will not apply beyond 2015 and so the final payment of 0.15% applying at 30th of June 2015 values.

No change announced in DIRT or exit tax rates, which remain at 41%, or in the standard CGT rate of 33%.

Some USC bands have been increased and some rates reduced, meaning an increase in net income of up to €900 per annum.

A reduced CGT rate of 20% is to apply from the 1st of January 2016 onwards on the sale in whole or in part of a business up to an overall limit of €1 million in chargeable gains.

The Minister has confirmed that the much disliked pension levy ends this year with the final 0.15% levy applying at 30th of June 2015 values. No levy will apply from 2016 onwards.

The standard USC rates and bands (for an individual under 70 who does not hold a medical card) have been reduced as follows:

The change in USC bands and rates shows the following difference in USC liability as between 2015 and 2016 at different levels of gross income: 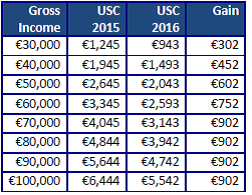 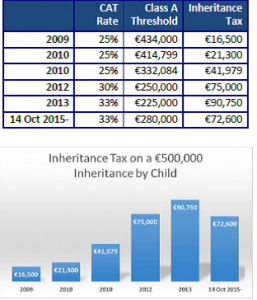 Proprietary directors, and their working spouses/civil partners, have traditionally been discriminated against because although they paid their income tax under PAYE like everyone else, they could not claim the PAYE tax credit of €1,650 available to all others paying income tax under PAYE.

From 2016, the self-employed and working proprietary directors and their working spouses/civil partners will be entitled to a €550 income tax credit against income tax on their earned income. The effect of this is similar to an increase in the standard rate band of €2,750.

In the case of a family company the tax credit will be available to each employee who is not entitled currently to the normal PAYE tax credit, so that a husband and wife both working in the business and drawing Schedule E income from it, will each be entitled to a maximum €550 tax credit, if they have sufficient taxable income.

An interesting side note: the tax credit will not reduce remuneration for pension funding purposes.

The Minister announced that a reduced CGT rate of 20% will apply from 1st January 2016 to the sale in whole or in part of a business up to an overall limit of €1 million in chargeable gains.

No change has been announced in the DIRT or exit tax rates of 41%, or the standard rate of Capital Gains Tax of 33%.